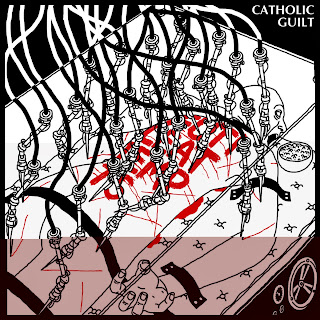 Hardcore's psychology and historical development can be divided into two categories: Giving a Fuck and Not Giving a Fuck. The former produced such luminaries as Minor Threat, Black Flag, Aus Rotten, and pretty much every band on Revelation Records. The latter gave us relatable deadshits such as Poison Idea, Negative Approach, Government Warning, and The Men.

Of course, most of us oscillate somewhere between these two moods, depending on how hungover or high we are. So it's nice to have a few records from the former category in your collection. Hell, on a fine spring day, I find myself singing along to "Minor Threat"! Usually, though, I wake up feeling like nothing. So I typically turn to the carrion pit of misery offered up by the second category.

Catholic Guilt falls squarely within the Not Giving a Fuck category, so blasting this EP at 3 AM was a whole lotta fun. My juvenile kicks were bolstered by the knowledge that I was waking up any upstanding neighbors of mine who actually have jobs and/or families (HA!). CG almost measures up with Poison Idea when it comes to dashing off cogent, well-written songs that eloquently express the entire band's lack of interest in most of humanity. The singer sounds as apathetic as Jerry O., and the band is adept at stop-on-the-dime hardcore humdingers.

Throw this one on when you're slobbering drunk, lurching around your apartment in a Vicodin-and-whiskey haze, and don't wanna remember the whole ugly experience. Shit, who woulda thunk it that Austrians could relax long enough to write music this loose, huh?

Listen to a few tracks from the EP here; the physical deal drops on December 20th. Just in time to buy it for your high school sweetheart before asking if you can kiss her on New Year's, kiddies!


*If you're in a band whose work I've posted, and want it taken down: PLEASE EMAIL ME. I'm happy to do so once I know of the problem. PLEASE DO NOT snitch on me to mediafire or whoever the fuck. Besides being un-punk, it creates a hassle for me and is sorta an insult since if I posted your record, it's because I love it and want people to buy it (or to encourage a re-press, if it's out of print).*

*9.6.12: Lemaire and Mediafire murdered all my old files and mixes. Email me or leave a comment and I'll re-up your requested file when I have a chance.*